A couple of days ago, a guy called Alfonso posted a comment on the Flash Midi Server page asking if the app could pass data from a midi controller to flash. FMS had always been designed to send out data – as I was originally interested in using Flash as the driving force for generative audio apps. But adding Midi input to the setup should open some more interesting possibilities.
I spent a couple of hours setting up an Input version last night – and got a demo version working. 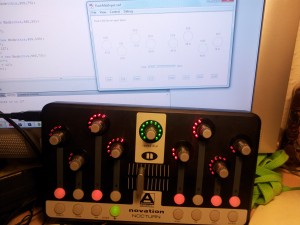 In the image, the controller positions on the Novation Nocturn are mirrored in the swf.

I need to add the new input functions to the current FMS server app – but expect an Input / Output Flash Midi Server to come in the next few days.